Guest Resource Services together with Fair Price arranged a graduation ceremony for the learners at Fair Price. There were fifteen learners in total who completed their W&R SETA NQF1 General Education & Training qualification (120 Credits), although only thirteen were in attendance for the graduation ceremony.  When we arrived at Fair Price, we were pleasantly surprised to see how well prepared everything was. The ceremony took place outside, with four large tables setup with beautiful decorations. 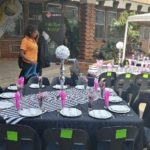 The ceremony began with Dr Wilma leading the speakers up the stairs, where they took their seats on the stage. Our facilitator, Tebogo Moloane the master of ceremonies, started off the speeches. Next, we had our Operations Manager, Piet Guest, say a few words of praise, ending his speech on a joke that had the whole audience chuckling. Next, we had our CEO, Dr Wilma Guest-Mouton, give a hearty speech commending the learners and giving them some life advice on the importance of responsibility. 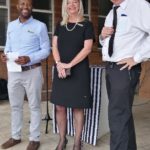 After the speeches concluded, Dr Wilma handed out the certificates to the learners one by one, while smiling broadly for the pictures. When each learner had their certificate, the music began to play, indicating for them to stand, while the speakers were led off stage with Dr Wilma at the head of the procession. Once the music stopped, everyone took their seats to enjoy the meal that was wonderfully prepared. There were samosa platters, biryani, rice and other delicacy’s which made everyone’s mouths water. 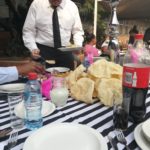 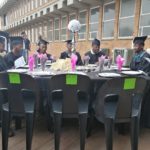 Overall, the atmosphere was very pleasant, the decorations were beautifully prepared, the food was exquisite, and it was a good day for everyone who attended.

We would like to say a big thank you to everyone at Fair Price and Guest Resource Services who assisted in the preparations, and we would also like to say another big congratulation to the learners who completed, we are very proud of you.