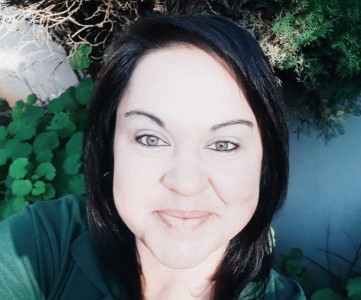 Rizelle and Amos went to the post office in Pretoria North which turned into an eventfull afternoon.

Here is their take on what happened:

“As I parked the car there had been an accident. A Guy on a bike drove into an old man that works as a security guard at Checkers as he was busy crossing the road. Nobody responded in assisting him. Rizelle ran to the old man, as he was just lying in the middle of the road and he seemed to be badly hurt and injured. The front of his head had an open wound and was bleeding, and blood was also coming from his mouth.

There was no first aid kit available to use but another lady had some cotton wool with her, and a police officer stop there to help. I asked him for gloves, and I know I’m not supposed to use the cotton wool on the wound, but I didn’t have any other choice. I rolled the cotton wool and stuck it up his nose and then I also put the cotton wool on his forehead wound, just to stop the bleeding.

The police officer laid in front of him to keep him still, the lady phoned the paramedics. We informed the old man that the paramedics were on their way but then he started screaming that he didn’t want to go with them.

As soon as they arrived, they asked him if they can take him to a hospital and he said no and started screaming, and said Rizelle already helped him, and he was scared. He didn’t want them to help him, so Rizelle needed to roll the bandage around his head and around his scarred fingers. He didn’t want Rizelle to leave him, he started screaming if he didn’t hear her voice.

The paramedics told us they can’t take him if he doesn’t want to go. They can get in to trouble. Luckily a lady who knows him, phoned his sister. As the sister arrived, she needed to give the paramedics permission to take him to the hospital.

Everybody showed their appreciation to Rizelle, who assisted the injured man, as nobody else was willing to get involved. A relative also contacted her to say thank you and that he was in a stable condition in the hospital.”

Thank you Rizelle, you really make us proud that you could use your first aid knowledge to assist a person in public.