On the 11th of September 2019, an unfortunate situation happened at the Bus Stop which is on  the corner of Daan De Wet and Doreen Avenue drive. The two Blind Learners namely Koketso and Asanda fell into the City of Tshwane manhole that was left uncovered and the opening is about 500mm x 500mm square. Learners who were at the scene called and we immediately went to assess the situation.

When we got to the scene rescue operations of removing learners from the hole were done already by the bus driver and other community members. 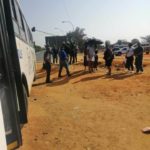 We rushed them to the nearest Clinic and they were examined and referred to hospital for further examinations. Asanda’s sister came and joined us at the George Mukhari Hospital in Garankuwa and Koketso was taken to Natcare Hospital in Mabopane because he has a medical aid. The two hospitals found no broken bones on both learners but Asanda had experienced more bruises as she is the one that fell first into the hole. Within three weeks both learners had recovered and came back to school.